The Akinya family is one of wealth and prestige. It’s a family that has seen the labors of its matriarch, Eunice; grow the family to become rich and powerful. Eunice has put herself in seclusion and lives in a space station called, “Winter Palace”. It is here that she dies and we find the lives of the Akinya family may change for either the good, or be ripped apart.

These are some of the items that Alastair Reynolds introduces readers to in the book, BLUE REMEMBERED EARTH. This is first book in his Poseidon’s Children series.

The book opens up with a letter, of types, explaining slightly what may lie ahead in the book. It gives us a bit of a background into who Eunice was. We then are given a prologue that introduces to Geoffrey and Sunday Akinya. These two children are the grandkids of Eunice and at an early age we find them exploring around the family compound.

This exploration leads them into trouble when they come across an artifact from a forgotten war. The events of this prologue help to give a bit of foreshadowing of who Geoffrey and Sunday grow up to be. Geoffrey becoming a man obsessed with studying the elephants of Africa and flying his old Cessna airplane over more modern devices. Sunday moved out into the stars and lives in a zone on the Moon were the devices of their modern world are not always active.

These events all tie together into what will eventually become a mystery into the loose ends that Eunice may have left behind upon her death.

The family company is being run by cousins Hector and Lucas who seem to look for profit over so many things. Geoffrey and Sunday are seen as family outcasts as they have shunned their family obligations and have gone and done their own thing. Geoffrey receives a small amount of money for his elephant research, but Sunday is left to fend for herself.

It’s after Eunice’s death that Geoffrey gets an offer few could refuse. The cousins come to him asking him to clear up a family loose end and check out a safe deposit box that Eunice left on the moon. After much decision Geoffrey agrees to go after he is insured the cousins will increase his funding. As we follow the story along we find out the contents of this safe deposit box will lead both Geoffrey, and Sunday, into a mystery that could unravel the family, if not the world.

Reynolds goes into much detail explaining this near utopian future that people live in. People have the ability to “ching” with each other not just over miles but over planets. The ching being a way they can speak to each other using implants that all humanity is given. Along with this ability people can even be in two places at one time as they can control a golem of themselves in a different location.

Along with these wonderful abilities there is the mechanism that ensures people do not harm each other. If one attempts to take a swing at a family member in anger they are shut down forcibly through a mind attack. As one reads we will see this happens to one of our leading characters.

What Reynolds does with this book is open the reader to a whole new possibility for our future. We find that Africa has become a dominant power and that man has colonized space and are even mining asteroids and moons. The utopia is not complete as there are still conflicts between governments and more importantly family.

As you read this book you find that it will appeal to readers of different genres. The fans of sci-fi will find a lot to love about this book. There is the science of this world that is explained in some great detail. This detail is not just saved for the science but also the way the landscape and characters are described. There are elements of mystery also within the book as we read along we look at the same set of clues that drive both Geoffrey and Sunday along in their investigation. Along with those there is also some political intrigue as there are powers that are just as curious about what Eunice head.

Overall, BLUE REMEMBERED EARTH could be seen by some to be a slow read as Reynolds does such a great job in painting the world we find the story set. This could cause some to see the story as being to descriptive. The argument for that is that within those descriptions there is a beautiful well painted world. There is also the fact that the story, and sub plots, is told in a way that people should find it a great read. A book may be a departure from Reynolds other stories but is still worth a read. 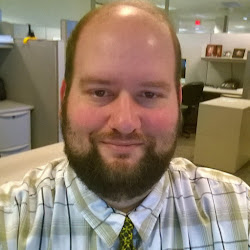 Shawn Micallef is better known by fans of the HorrorAddicts.net podcast as Knightmist. Shawn has turned his talent for reviews from movies to now books. He has a varied, near eclectic, taste in his likes of music, movies, and books. Along with having written reviews for HorrorAddicts.net Shawn has begun writing short stories and has shared some of them on his personal blog. The blog contains other reviews and is a slowly growing work that is just as eclectic as Shawn. Visitors will find things from life stories, to personal thoughts and of course reviews. The blog is a place the 39 year old married man, places those odd moments of life that come to light when he has time to reflect. It just makes sense that a man who lives in Wisconsin with his wife and two cats may seem a bit eclectic. If you consider the man went from being a troll, to a yooper and now a cheese head can things get any more odd? To define those terms well you’ll just either have to contact him or just look them up online.

This site uses Akismet to reduce spam. Learn how your comment data is processed.