Join the Robots as they review Lion’s Blood by Steven Barnes.

This week the Robots fight off Skype bugs to dig into Horns by Joe Hill. Join us as we suss out where it works and where it falls flat.

This week’s episode is brought to you by the Loft Literary Center. The Loft Literary Center, located in Minneapolis, is one of the nation’s leading literary nonprofits and offers a wide array of online and in-person creative writing classes for all levels and genres. Online classes are offered seasonally, so all you need is Wi-Fi to learn from experienced writers and transform that creative spark into a piece of art.

Join the Robots as they review Under A Graveyard Sky by John Ringo.

Zombies are real. And we made them. Are you prepared for the zombie apocalypse? The Smith family is, with the help of a few marines.

When an airborne “zombie” plague is released, bringing civilization to a grinding halt, the Smith family, Steven, Stacey, Sophia and Faith, take to the Atlantic to avoid the chaos. The plan is to find a safe haven from the anarchy of infected humanity. What they discover, instead, is a sea composed of the tears of survivors and a passion for bringing hope.

For it is up to the Smiths and a small band of Marines to somehow create the refuge that survivors seek in a world of darkness and terror. Now with every continent a holocaust and every ship an abattoir, life is lived under a graveyard sky.

Find it on Amazon and direct from Baen Publishing.

You can pick up a bundle with the sequel to this book, and many other books, until late night on 1/15/3014 at Baen Publishing.

This week the Robots talk about Ernest Cline’s debut novel READY PLAYER ONE. We talk about what we liked, what we thought could have been improved, and what we learned from it. Enjoy!

This week we FINALLY discuss the book Terry asked us to review back about five years ago, David Weber’s OATH OF SWORDS. Along the way we also talk about genre tropes and whether or not they should be avoided. We hope you enjoy!

If you’ve not read OATH OF SWORDS, but would like to, right now Amazon has it available for FREE! Click on the book and get it now!

And our next book to review is READY PLAYER ONE by Ernest Cline:

This week the Robots sit down to talk about Peter Clines’ novel “14.” We discuss what worked for us, what didn’t, and if we’d recommend it to others. But, more than that, we marvel at the fact that we finally all agree on a review book! This week the robots FINALLY review one of the books they said they’d read months ago. Paul offered up Stephen King’s “Salem’s Lot,” so this week they rip open that coffin and see what’s there. Enjoy!

The next book we’ll review is the book I offered up awhile ago, “14” by Peter Clines. Terry has also offered up David Weber’s “Oath Of Swords” 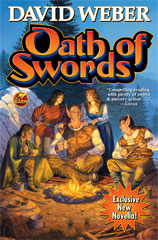 CITY OF THE FALLEN SKY, written by Tim Pratt, reviewed by Patrick DeLise

City of the Fallen Sky by Tim Pratt is a Pathfinder Tales tie-in novel based on the wildly popular Pathfinder tabletop roleplaying game published by Paizo Publishing. It takes place in the world of Golarion which is a real kitchen-sink setting–think pulp sword and sorcery mashed up with Tolkienesque high fantasy. Paizo has done a fantastic job with creating a setting which is deep, rich and colorful. The background of the city of Starfall is pure science fantasy, It is a city built around the ruins of ancient large spacecraft which fell from the sky eons ago. It is from Starfall that our protagonist the arcanist Alaeron has obtained five strange ancient artifacts which figure prominently into the plot of the book.

Some of the notable characters include a beautiful exotic archer Jaya and the mercenary rogue Skiver. Jaya is a ranger with the kick-ass archery skills from a far off land. She gets caught in scheme to fleece a retired adventurer/ treaser-hunter Radem Valim. Aleron gets mixed up in this mess defending Jaya from Valim’s goons. He also finds his dark past from Starfall catching up with him by way of rather nasty fellow by the name of Kormack. Valim enlists Alaeron, Jaya and mercenary rogue named Skiver to obtain ancient artifacts from Kho ,the titular City of the Fallen Sky. We follow our heroes on an adventure that spans the Inner Sea Region of Golarion.

The ancient mysteries of Starfall and Kho are the kind of things that make an fun-filled role-playing game session. City of Fallen Sky feels like someone took their gaming session and made it into a novel. Unfortunately, this is where the problem lies for me. The novel reads like a fantasy role-playing campaign which was fun to play but very tedious to read in print. For example, I don’t understand why Radem Valim decides to send the protagonists on an epic adventure as punishment for Jaya’s con game that goes wrong. I know we need to get the plot moving but this reasoning is very clunky and much too convenient.

The characters in this book feel like stock characters from a course called Fantasy Gaming 101. The protagonist Alaeron becomes love-sick teenager when we get inside his mind about his feelings for Jaya. The rogue Skiver is a tough as nails rapscallion who happens to be gay man. I give Tim Pratt kudos for the inclusion of a gay character in a shared-world fantasy novel. This is something you would not have seen in a shared world novel back in the eighties or nineties. It’s nice to see some progress and inclusion in old boy’s club of gaming fiction.

Overall, I would have enjoyed this book more if the characters were better realized. I feel the star of this tale is the fantastic world of Golarion. The amount of stories that could be mined from the Pathfinder setting are too numerous to consider. I look forward to the future tales in the Pathfinder Tales series.

Born and bred in the City of Brotherly Love, Patrick DeLise has been a nerd /geek from an era (1980s) before young hipster clowns appropriated the terms and made them “cool” . By days, he works as a mildmannered clerk for the local library system. By nights he dons a cowl and fights the forces of darkness in the never ending struggle. Or maybe he dons a CPAP mask and fights the forces of sleep apnea? Either way, he is hero to his wife and two kids.

I started writing seriously about ten years ago, and I wish like hell I’d had Rachel’s book way back then. If I had I would have avoided years of pain, problems, and lost words. And, I probably would have more published books to my credit instead of just the one I have right now. Folks, I don’t care if you’re just starting out as a writer, of you’ve been doing it for years, this book will help you become better, faster, and more thoughtful about your craft. I know that from personal experience. This isn’t some fly-by-night book meant to make a few bucks with a few dusty creative writing cliches. The tips and advice she gives are tried and tested. Not just by her, either. After reading about her methods on her blog, I employed them myself, and they work. It’s also why we brought her on the podcast. Right now I have a new book that is due to be published soon, I have another book that’s in the editing phase, and yet another book that I’m blazing through the first draft of. Rachel’s words of wisdom have helped make all that possible. Do yourself a favor — buy this book. And if you have friends who are writers, do the same for them. Rachel Aaron is a wonderful storyteller and writer, and with this book she’s also helping to make a new generation of writers who will fill the world with many more amazing books.

Jack the Ripper. He is a legend among serial killers and the boogie man to the rest of the world. The brutality shown in the five murders attributed to him is almost as notorious as the mystery surrounding his identity and abrupt disappearance. However, what if instead of being a homicidal maniac, the Ripper was actually a mad scientist working for the British government? David Golemon explores that possibility in his latest Event Group book, “Ripper”.

Professor Lawrence Ambrose is an American scientist hired by Queen Victoria to create a formula able to turn British soldiers into intelligent killing machines. Using an early version of his concoction, later named Perdition’s Fire, the professor becomes more than anyone can imagine or control. Unfortunately, this forces the Queen to order the formula to be destroyed and the doctor terminated. After a battle reminiscent of the Mr. Hyde fights in both “Van Helsing” and “The League of Extraordinary Gentlemen”, Ambrose escapes to America where he is eventually stopped by a contingency of US Army soldiers led by Lt. George S. Patton.

Per author, David L, Golemon, “The Event Group is the most secret organization in the United States, comprised of the nation’s most brilliant individuals in the branches of science, philosophy, and the military. Led by the valiant Major Jack Collins, they are dedicated to uncovering the hidden truths behind the myths and legends propagated throughout world history—from underground agencies and conspiracy theories to extraterrestrial life and UFOs.” The group is so secret, only the President of the United States (both past and present) knows of their existence. When a member of the group is captured by a ruthless Mexican cartel leader, Major Collins leads a small team to rescue her. During the course of the mission, a secret cache of Perdition’s Fire is discovered with terrifying results. The British government is willing to pay any price to destroy the formula and keep their involvement in its development a secret. Much death and destruction follow.

I freely admit that I hadn’t heard of this series before this novel. I am, however, a fan of Jack the Ripper stories, so I thought I’d give this book a go and am glad I did. The way the author weaved the story made the historical parts seem plausible, and got you caring about certain characters and whether they make it out of the story alive. (Not spoiling a thing, mums the word) As much as I enjoyed the story, however, there were some faults that proved a little bothersome. There were some recurring characters whose presence didn’t seem to add to the story. Also, while I expected a violent story since it is military sci-fi, the amount of headshots taken seemed gratuitous for a non-zombie book. Overall, I rate the story a 4 out of 5 and look forward to reading the rest of the series.